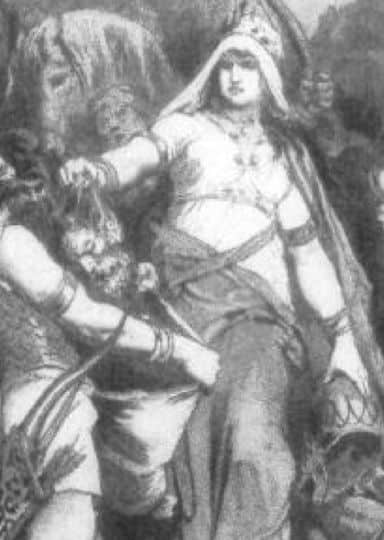 Little is known of Tomyris, Queen of the Massagetai, except the story, told by Herodotus, of her people's destruction of Cyrus the Great and his army of Persians in 529 B.C. What is known, however, makes Tomyris worthy of inclusion here.

Tomyris took the throne of the Massagetai after her husband, the King, died.1 Herodotus relates that she ruled a "great, warlike nation" who lived eastward beyond the river Araxes, and opposite the Issedonians on the Caspian Sea in the area now known as eastern Iran.2 The Massagetai were Scythians and fought on foot and horseback with bows, lances, and battle-axes.3

After conquering the Babylonians, Cyrus (c. 550 B.C.) decided to conquer the Massagetai.4 He first proposed marriage to Tomyris and thereby to gain control of her lands. But when Tomyris saw through this artifice, Cyrus chose to invade, marching to the Araxes and building a bridge to cross the river.5

Tomyris sent a messenger to Cyrus, requesting him to end his conquest and be content to rule his own kingdom in peace. But, knowing that he would not heed her words, she offered to retire by three days' march from her side of the river and allow him to cross and give battle in the lands of the Massagetai; or if he preferred to give battle on Persian ground, proposed that he retire an equal distance.6

Upon the advice of his chiefs, Cyrus was first of the mind to let Tomyris come across to his side.7 Croesus the Lydian, however, disagreed and urged him to cross the Araxes, adding, were it not disgrace intolerable for Cyrus the son of Cambyses to retire before and yield ground to a woman?8 Croesus then offered a plan to defeat the Massagetai without a pitched battle. Said he, I am told they are unacquainted with the good things on which the Persians live, and have never tasted the great delights of life. Let us then prepare a feast for them in our camp; let sheep be slaughtered without stint, and the wine cups be filled full of noble liquor, and let all manner of dishes be prepared: then leaving behind us our worst troops, let us fall back towards the river. Unless I very much mistake, when they see the good fare set out, they will forget all else and fall to.9 Upon this advice Cyrus changed his mind, and informed Tomyris that she should retire and that he would cross the stream.10

Executing Croesus' deceptive scheme, Cyrus advanced a day's march from the river and left the worthless portion of his army in the camp; he then drew off with his good troops towards the river. Shortly thereafter, a third of the Massagetai came and attacked those left behind by Cyrus, putting them to the sword. Tomyris' son, Spargapises, led this force.11 As Croesus had foreseen, upon seeing the banquet they feasted, eating and drinking their fill. After they were sunk into drunken slumber, the Persians attacked, killing many and taking a greater number of prisoners, including Spargapises.12

Tomyris then sent a herald to Cyrus with the following demand: Restore my son to me and get you from the land unharmed, triumphant over a third part of the host of the Massagetai. Refuse, and I swear by the sun, the sovereign lord of the Massagetai, bloodthirsty as you are, I will give you your fill of blood.13 Cyrus ignored the message, however; and Spargapises, realizing his situation and not wanting to become a hostage, killed himself at the first opportunity.14

Tomyris then collected all the forces of her kingdom and gave battle to Cyrus. According to Herodotus, it was a fearsome and lengthy conflict, but eventually the Massagetai prevailed, destroying the greater part of the Persian army and slaying Cyrus.15 After finding his body, Tomyris took a skin and filled it full of human blood. She dipped Cyrus' head into the gore, saying, I live and have conquered you in fight, and yet by you am I ruined, for you took my son with guile; but thus I make good my threat, and give you your fill of blood.16