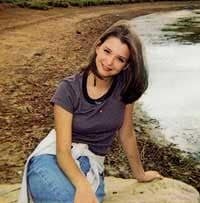 2. Hence, one who sacrifices his life, his station, or what is of great value to him, for the sake of principle, or to sustain a cause.

According to an eyewitness, Eric Harris shot Rachel Scott, a 17-year-old girl of deep religious faith, on April 20, 1999 during his rampage through Columbine High School. Rachel and the eyewitness, Richard Castaldo, had already been wounded by gunfire from Harris and Dylan Klebold. Harris grabbed Rachel by the hair, pulled her head up, and asked her if she believed in God. She responded, You know I do. Harris thereupon killed her with a shot to the head.1

Rachel must have been familiar with this passage from Matthew, and with unquestionable courage, decided to choose the better part.

A web site devoted to Rachel Scott can be found here.

1. D. Scott & B. Nimmo, Rachel's Tears 91-92 (2000). The exchange between Scott and Klebold is controversial; apparently, Castaldo later denied hearing it. The autopsy report for Rachel Scott, however, clearly documents a gunshot wound to the left temple, in addition to those in her trunk, left arm and left thigh.

2. New American Bible 26 (1970). A similar scriptural reference can be found in Mark 8:38: Whoever is ashamed of me and of my words in this faithless and sinful generation, the Son of Man will be ashamed of when he comes in his Father's glory with the holy angels. See also Luke 9:26.