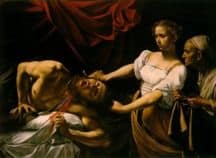 For sheer self-confidence, courage and religious faith, few women in history approach Judith, whose fascinating story appears in the Old Testament Catholic bible and in the Apocrypha of some Protestant bibles.1 She was not so much a warrioress as an assassin, using guile and deception to single-handedly destroy the leader of a powerful army of Assyrians determined to punish the Israelites and lay waste to Judea.

The Book of Judith is believed to have been written at the beginning of First Century or end of the Second Century B.C.2 The author is unknown,3 but most believe it was written by a Pharisaic Palestinian Jew.4 Catholics consider the story factual, but many have concluded that it is fiction due to its numerous historical and geographical inaccuracies.5

Judith lived in Bethulia in Judea. She was, by all accounts, beautifully formed and lovely to behold, but more importantly, was a deeply pious, God-fearing woman who was held in high esteem by all who knew her.7 At the time that her town was beseiged she was in mourning following the death of her husband.8

The military threat to the Israelites arose after they refused to aid Nebuchadnezzar, king of the Assyrians, who desired to make war against the Medes.9 After defeating Arphaxad, ruler of the Medes, Nebuchadnezzar ordered Holofernes, his second-in-command, to commence a punitive campaign against the countries who had refused to assist him.10

Holofernes set out with a vast force of regulars and mercenaries too many to count, like locusts or the dust of the earth.11 He marched into the hill countries, pundering and killing those who resisted.12 Even the lands of those who surrendered were devastated, for he had been commissioned to destroy all the gods of the earth, so that every nation might worship Nebuchadnezzar alone, and every people and tribe invoke him as a god.13

The Israelites, not of a mind to surrender, prepared for war.14 Their high priest, Joakim, instructed Bethulia to hold the mountain passes by which Holofernes might gain access to Judea.15

Holofernes, hearing of their defiance, summoned Achior, leader of the Ammonites, who related the history of the Israelites and told him that they could be conquered if they had sinned against their god.16 Achior warned Holofernes, however, that if they are not a guilty nation, then your lordship should keep his distance; otherwise their Lord and God will shield them, and we shall become the laughing stock of the whole world.17 Holofernes, unimpressed, kicked Achior out and handed him over to the inhabitants of Bethulia.18

Holofernes laid seige to Bethulia and cut off its water supply.19 After 34 days the Israelites were high and dry and demanded Uzziah, their leader, to surrender, but he bought time by asking them to wait five more days for God's intervention.21 Little did anyone know that this would prompt an indignant Judith to swing into action with a plan that would end with Holofernes' head hanging from Bethulia's walls!

Judith first demonstrated her unshakable faith and self-confidence when she summoned the city's rulers and chastised them--not for conceding to the possibility of surrender,21 but for putting God to the test! Said she: It is not for you to make the Lord our God give surety for his plans. God is not man that he should be moved by threats, nor human, that he may be given an ultimatum.22

Judith boldly announced that she had a plan to defeat the Assyrians, proclaiming that she would do something that will go down from generation to generation among the descendants of our race.23 Choosing not to reveal the details of her intentions, she instructed them to allow her to pass through the city gates that night, and within the days you have specified before you will surrender the city to our enemies, the Lord will rescue Israel by my hand.24

After praying for help, Judith rid herself of sackcloth and ashes and made herself very beautiful, to captivate the eyes of all the men who should see her.25 Taking ritually pure provisions, she and her maid left the city and boldly proceeded to the Assyrian line.26 It is hard to imagine the courage she must have possessed to venture out in this manner.

Judith told the Assyrian soldiers that she was fleeing Bethulia and wanted to tell Holofernes of a route by which he could take the mountain district without losses.27 Holofernes' men, captivated by the Israelite's good looks, took her to see him.28

To Holofernes Judith confirmed Achior's words: that God would punish the Israelites, who in their desperation were planning to violate Mosaic law.29 She told him that God had directed her to go to Holofernes to perform with you such deeds that people throughout the world will be astonished on hearing of them.30 She would stay in his camp, but nightly would go out and pray to God, who would let her know when the Israelites had broken his laws; she would then lead Holofernes through Judea to Jerusalem, and there I will set up your judgment seat. You will drive them like sheep that have no shepherd, and not even a dog will growl at you.31 Holofernes was impressed by Judith's beauty and wisdom.32 Her business-like attitude must been quite different from the Assyrian women he was used to.

For three days Judith established a routine of eating only what she had brought, bathing to purify herself, going out nightly to pray.33 Holofernes decided to seduce Judith and have forced relations with her.34 On the fourth day, he ordered a banquet and requested Judith to attend.35 She willingly agreed, donning her festive garments and all her feminine adornments.35 This had the desired effect: The heart of Holofernes was in rapture over her, and his spirit was shaken. He was burning with the desire to possess her, for he had been biding his time to seduce her from the day he saw her.37 They ate and drank wine, and Holofernes became more drunk than he had ever been.38

After the banquet, Judith was finally alone with a very drunk Holofernes in his tent.39 After he passed out, she said another prayer; she then took Holofernes' sword, struck him twice and decapitated him.40 She and her maid escaped from Holofernes' camp with the head, which at her direction was hung from the city wall.41 The Assyrians panicked upon discovering Holofernes had been slain, and were routed by the Israelites.42

1. At the Council of Trent in 1546, the Book of Judith was authorized as part of the Roman Catholic canon. R. Brown, New Jerome Biblical Commentary 38:26 (Prentice Hall 1990). It is regarded as noncanonical Jewish literature by Protestants. Ibid.